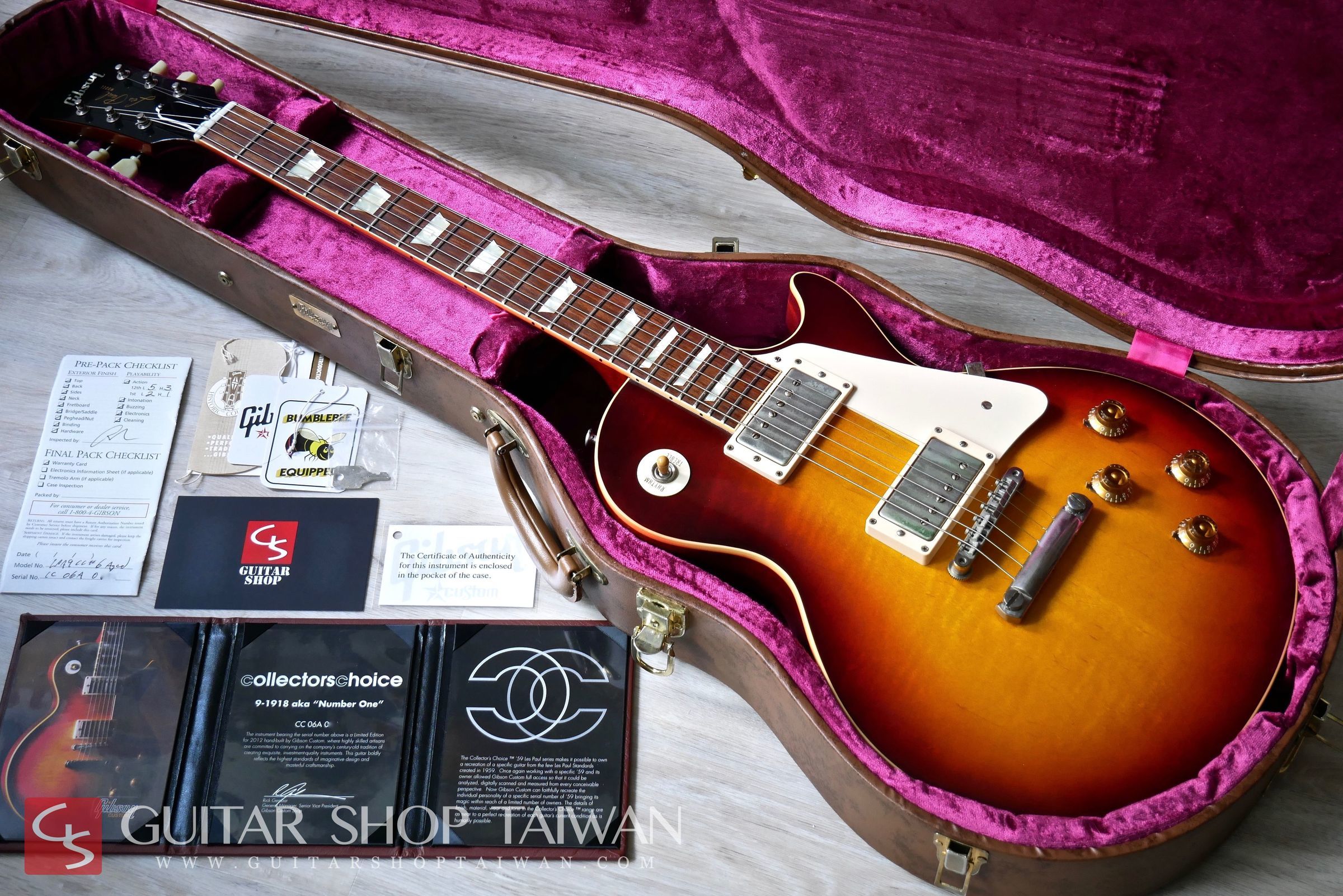 Limited run of 300! Guitar is in very good collection, has some very little scratches, frets is in 80%. Comes with the original Gibson hard case, COA and original paperwork.

Guitars in the Collector's Choice™ series by Gibson Custom bring players and collectors closer to owning a specific, existing vintage Les Paul than anything else available on the market. Through exacting study and measurement of the original instrument, precise digital scanning of the woods, and the unparalleled skill of the luthiers of Gibson Custom—all with the generous and unrestricted cooperation of the subject guitar's current owner—each Collector's Choice™ guitar represents a detail-perfect recreation of the look, feel, tone, and vibe of a particular original "burst." Gibson Custom is proud to announce the release of Collector's Choice™ #6 1959 Les Paul #9-1918. This rare and highly prized 1959 Les Paul Model is an extremely clean original example, and exhibits many of the most desirable traits of 1958-1960 Les Pauls. "I call it my 'Number One' or 'Desert Island' guitar because it's by far the best guitar I've ever owned, held, or heard," says Mike Slubowski, owner of the original 1959 Les Paul. Collector's Choice™ #6 1959 Les Paul #9-1918 is being made available in a limited run with a maximum of 300 examples, with the availability of qualifying materials ultimately determining the final number.

According to the Gibson Custom team that analyzed the guitar in a series of hands-on sessions, the original is a pristine example of a guitar whose fifty-plus years have been lived gently and quietly. The guitar has consistent edge radiuses and clean cavities which clearly exhibit the original tool marks, and its top has just enough figure to lend it character, without upstaging its remarkably strong, unfaded, deep-cherry sunburst finish—what Gibson Custom's finish experts have dubbed "non-filtered tobacco burst," a rare finish even in its day. In fact, the only evidence that this finish was ever exposed to light at some point in its life is a dark, sales-tag-shaped portion of the finish, which otherwise remains strikingly vibrant. Digital analysis of the guitar reveals a dish carve with a subtle flatness, and a neck profile with just enough "cheek" for the optimum in-hand feel, while its ideal specifications are further echoed in a very slight difference in bridge and neck pickup outputs. In short, the Collector's Choice™ #6 1959 Les Paul #9-1918 is an impeccable recreation of one of the world's most desirable vintage electric guitars.

In order to bring this Limited Run reproduction as close to the original as is humanly possible, Gibson Custom's master luthiers have carefully selected from premium, aged tonewood stocks to closely match the look of the original's lightly figured two-piece maple top, lightweight one-piece mahogany body, and one-piece mahogany neck. Gibson Custom has formulated a unique Non-Filtered Tobacco Burst finish for the top, with traditional aniline dye for the neck, back, and sides, and, following hand-sprayed coats of nitrocellulose lacquer, the entire guitar has been hand aged to reflect the gently worn condition of the original. The neck is carved to a profile that accurately recreates the feel of the original guitar's full, rounded neck. Dark-brown Indian rosewood is used for a close match to the fingerboard, and is inlaid with traditional nitrocellulose trapezoids, trimmed with cream binding, and topped with a nylon 6/6 nut.

To complete the sonic accuracy of Collector's Choice™ #6 1959 Les Paul #9-1918, Gibson Custom carefully measured the pickups in Mike Slubowski's original guitar and recreated a set of Custom Buckers wound to precisely the same specs. Details include Alnico III magnets and 42 AWG enamel-coated wire wound around distinctive "zebra coil" bobbins, which are hidden by gently aged nickel-plated covers. These pickups' renowned blend of depth and clarity is complemented by the traditional pairing of a traditional ABR-1 Tune-o-Matic bridge and lightweight aluminum stopbar tailpiece, both nickel plated and aged appropriately, and a set of gently aged nickel reissue green-key tuners. For players and collectors seeking the look, feel, and tone of an exceptional original 1959 Les Paul Model guitar, Collector's Choice™ #6 1959 Les Paul #9-1918 represents a rare opportunity. The guitar will be produced in no fewer than 25 and no more than 300 examples